A fall hike with things falling

It’s been a few weeks now since we took the hike I wanted to write about. The grading and lesson plans have completely taken over my life, and the guitar is going unplayed, the dishes are piling up, and the writing’s not getting done. Mid-semester fall is about the worst time of year work-wise for an academic, and it’s a pity, as it’s definitely my favorite time to be walking about with no definite purpose other than to absorb the what’s there to see. I had wanted to talk about falls colors, since for us ruralists – well, us arboreal mid-Atlantic and New England state ruralists – the fall transformation that so many city-dwellers and suburbanites seek out as car-touring eye-candy is no less a spectacle and a prompt to reflections on beauty, mortality, and the value of the natural world, even if it does fall somewhat into the rhythms of the typical. Then the colors were only starting to change, and that change was mostly to the deep reds or pure yellows of shrubs and vines, with additional notes of yellows and purples provided by late-blooming wildflowers. Now the maples with their monochromatic but grandiose show have gone fire-orange and nearly done, with the top half of the trees fairly much blown out by now. Even the massive maple in our backyard, which is for us fall’s biggest diva, going dramatically yellow before gracing us with two days of a constant rain of color as the leaves drop, has this year shed all its leaves without our noticing.

The wildflowers still hold their own. Our perennial black-eyed susans have long ago dispensed with their blooms, but in the wildflower patch that I seed each year the annual black-eyed susans and the lavender cosmos have been going full strength for quite a while, and the cosmos are particularly impressive with their largish blossoms on long stalks swinging above all the waste of dried grass. Yellow and purple: while the trees seem to prefer a more linear cycle of bare, green, riot of fall color, and then to bare again, flowers head out much in the same way they came in. They show up in the spring with yellows and purples first, and that’s what we’re seeing now. Out and about, though thinning now, are goldenrod and one of the most impressive and hardy displays of fall color around here, late-blooming asters. Unnoticed all summer, every sunlit spot in fall is occupied by rows of them now, with tiny, purple daisy-like blossoms clustered in profusion up and around high stems. They’re not unique to the woods – I see them in the unmowed sides of the parking lots in New Brunswick too. If someone knows the common name, please let me know. 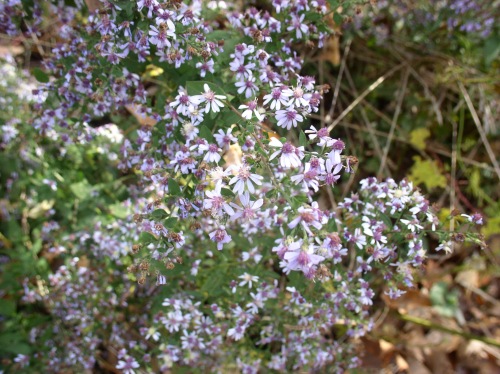 So anyway, a few weeks ago fall had only begun to color in, and we went for a walk up Bald Pate Mountain across the road from the farm. One of the real pleasures of living here on the farm, the mountain – and it’s only a mountain in the New Jersey sense that also calls river rapids “falls” – is county parkland that bought up an large, old farm property plus the surrounding woodland. It lay pretty much as it was bought for many years, the farm houses and outbuildings crumbling in neglect, and more or less unknown except to a handful of hikers, birdwatchers, mountain bikers, and the hunters brought in each winter to cull the massive deer herds around here. Now, however, after a decade of planning, parking lots have been built and a volunteer association has even manicured a phenomenal hike up the rocky side of the hill, with large stones pushed into massive winding staircases in a couple of locations. The hike is steep, wooded, and rocky for a while, and then it breaks into the farmland up top, which is flat and cleared, hence the mountain’s name, with trails taking you, if you like, about the two farmhouses and even down the other side of the mountain into a deep hollow where I often see foxes sniffing through the underbrush.

Then it wasn’t the leaves falling so much, as it is now, but nuts. Everywhere – it was a spastic symphony of dull thumps, starting, stopping, coming in bursts, then nothing for a while. Acorns, sure, and we have quite a few this fall. I don’t know what the factors are, but some falls are heavy with acorns and others not so much. The late and dearly missed property manager of the farm who also ran the hunt club here told us once that the turkey population in the area ebbed and flowed depending on the number of acorns on the ground. It’s certainly true that in lighter years we hardly see the birds in the fall, but I’ve been getting a sense lately that the turkey population has been declining overall, as we don’t see the large flocks like we used to. It’s too bad – turkeys are wonderful birds: vaguely ridiculous, and more so when they’re running away from you or trying to get those massive bodies into flight, and they seem at times almost noble as they strut about in small groups with a stiff and dignified bearing in their long necks, a bearing that’s quickly belied by what seems to be their utter stupidity once confronted with any threat. An avid turkey hunter and fellow Whitman scholar told me that in the field the birds seem wise, elusive, and cunning, disappearing like smoke whenever hunters appear on the scene. It’s hard to reconcile this vision with the turkeys I’ve known. Maybe everything changes once the shotgun is in the hand.

We leave the piles of acorns back home when we move out from the shade of our massive white oak and head up the hill. Black walnuts grow around here in profusion, and their nut, with its thick green casing, is quite large. And the branches of the trees in fall are quite laden, like a grape vine, with walnuts. If the surface beneath the tree is flat and hard, like a road, it’s not long before the squished and decaying nuts form a growing slick of greenish-brown mashed nut stuff. It would hurt if a walnut fell on your head, I imagine, and if you’re in range you’re as likely to get hit with three or four as just one. In addition to the walnuts on the ground, we also find hickory nuts everywhere, in a couple of varieties: one, elongated and large like a pecan, the other, round and small like a filbert. Both smooth green and the casing peeling when ripe to easily detached quarters. I crack open and taste one of the small ones, and the meat is sweet and tasty but there’s an intense layer of nutty bitterness to the flavor that would make it nearly inedible in anything but the smallest nibble. There are cultivated hickory nuts, I’ve read, but I wouldn’t know which ones those might be. Up the hill, once we’re into the grassy fields, we also find beechnuts on the ground, and chestnuts. The chestnuts’ casing is famously spiny, and shelling those things must be murder – it’s difficult to even let them rest in the open palm, the spines are that stiff and the whole thing that heavy. We find many more walnuts, too, as we walk down one of the farm roads, in small piles where they roll to a rest at the sides of the gravel. My son invents a game of throwing them into the cellar stairway of the workshop in one of the outbuildings to see how badly he can split the casings.

We stop to rest and look. The view through the clearing from the larger farmhouse can be quite impressive. You can see across the Delaware into much of Bucks County. I imagine now with some of the leaves going that you should be able to see a good bit of the river below as well. I’m sure I’ll find out soon enough.

The number of nuts we’ve seen (evidence of which soon fills my son’s pockets and my own) makes me start looking out for a specimen of the true glory of nut season in Jersey farmland: the Osage-orange, or horse apple. I’m surprised that as we head back home for dinner that we don’t spot any on the mountain, as there are many of them about the area, and this time of year quite noticeable. The tree is not native, but, as the name would indicate, comes from the region where you would have found the Osage tribe in times past, Arkansas and Oklahoma. They were imported here, as elsewhere, to form hedgerows for fields, because of their rapid growth and hardy nature. You can see from this map that the distribution of the tree is quite specific to the vegetable farming areas of central Jersey, the agriculture of the south tending more toward fruit orchards and cranberry bogs and the like (ah, asparagus, how much we miss you). I don’t know that anyone trims the Osage-oranges back into hedges anymore, so they grow up into trees and produce the most unlikely fruit: massive yellow-green lumpy balls quite a bit larger than a softball. There’s nothing orange or apple about them, despite the names. They’re quite hard but composed through and through of a compressed seed matter with no peel or casing. Because they were initially planted as hedgerows, they’re often found right up on the street or trail. There’s a whole row of the trees leaning over our street from the property adjoining the mountain park. When one of the horse apples falls, the thump is impressive. I can’t imagine how much it must hurt if they were to fall on you: a friend says one cracked her windshield the other week. Piles of them by the road in the fall are part of the local experience.

A small horse apple/Osage-orange gallery. The first photo is by the wife, who has a far superior eye for composition, as you can see. 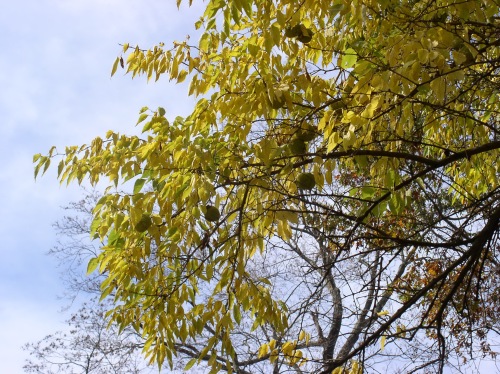