An interesting controversy. And a ridiculous decision on the part of FIFA, the international governing body of professional soccer – well, football as they call it. Basically, just before the Iranian women’s team was set to play an Olympic qualifying match against Jordan last week, they were disqualified for wearing uniforms that might cause the players injuries – that is, for wearing an athletic version of headscarves. The international uproar isn’t helping the already scandal-plagued organization.

I think the case is worth noting because headscarf bans in general get promoted as potentially liberating for the women that they affect, but the liberation of those women is never what actually prompts the bans or serves as their goal, and in fact the bans generally serve to perpetuate or further restrictions on the freedom of those women. I think that’s quite clear in the FIFA case.

Rather than ban the headscarves, it’s more productive, I would think, for those that believe the scarves to be an expression of the oppression of women to advocate instead for the use of headscarves so that women who feel compelled to cover their hair in public can participate as much as possible in public life, and thereby see and experience how other women and other cultures negotiate the demands of modesty and public display. Otherwise, as we see from the FIFA example, they quite literally cannot participate, and therefore forfeit any advancement they may have potentially made on behalf of their gender.

In any case, Fast Company’s Co.Design blog reports on an elegant solution – and what I believe should be the desirable outcome in the situation: a sleekier, even more athletic hijab being offered by ResportOn, a company established by designer Elham Seyed Javad to respond to this very need. 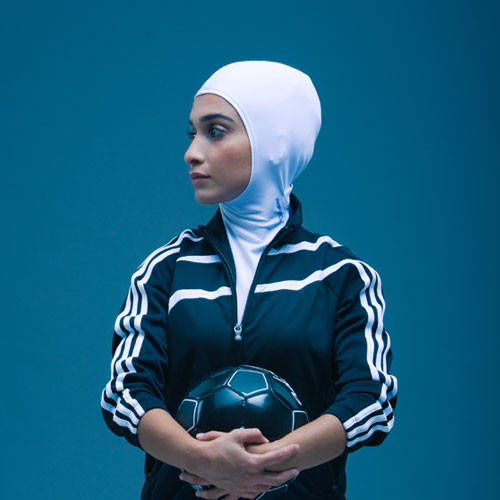 The sports hijab was apparently initially inspired by a taekwondo ban on female Muslims wearing a headscarf beneath a regulation helmet. These are the advancements which serve global civil liberties in the 21st century. If FIFA is able to find this acceptable – and that’s by no means given since the reasons for banning the hijab initially aren’t fully clear and likely more about cultural bigotry or the desire to make women’s soccer more like beach volleyball – but if they do, soccer and sport in general advances, religious liberties advance, personal freedom advances, so does women’s liberation, and finally so does secularism. Hurray! If not, well, we’re in this for the long haul.

One response to “Headscarves and soccer”