Fall is now everywhere in evidence. But a couple weeks ago, on the most recent decent walk I’ve had, its signs were only visible once we’d left the road. The trees, except for a few walnuts, still had all their leaves, and most of them were still green. The grasses and brush in the fields were not. They seem to have to have their life burnt out in an instant just before, which my wife confirmed: “It was all green a couple days ago!” The stalks and leaves were crisp, but despite their look were not disintegrating into ash at the touch. The mullein stalks though having gone completely brown had lost none of their substantial appearance. 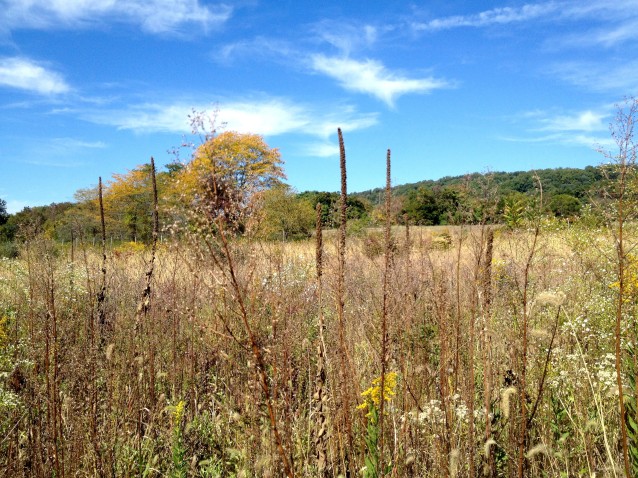 The dominant notes were of course the tall goldenrod everywhere and the small, white late-blooming asters. I haven’t made much progress in learning my wildflowers, but it has been impressed upon me that species vary quite considerably over locale and none quite so much as the asters, so I can’t even fix a common name to this very common flower. And I’m not entirely sure the beautiful little white ones are even a different species entirely from the identical but purple ones that appear at the same exact moment in ditches and parking lots everywhere around.

A pair of flycatchers flew across the path as we walked in, and there were insects enough to chase. There were two distinct and fairly uniform layers: the large grasshoppers working their way through the vegetation still chewable, and the dragonflies at chest level, about stalk height, looking for something a bit livelier. It was a landscape of appetite.

I thought about Aesop’s grasshopper, and now at home I can’t find my copy of La Fontaine. At the time I was wondering about cultural memory. How far removed was the origin of the fable from when the grasshopper’s hunger was common to all throughout the winter. Although the moral gets interpreted as a general recommendation for industry, it’s not hard to see its literal value in an agrarian society’s ethical indoctrination of its members. Some memory of fall’s appetite persists.

Appetite shapes more than stories. We passed one of our favorite honey locusts, the trunk and branches covered in complex spines, a result of the long vanished pressure of appetite from the area’s stone-age megafauna. The same I understand with the massive fruit of the Osage orange, another thorny tree. The Osage orange isn’t from here, or most anywhere it’s found, but widely transplanted as a hedgerow for now vanished or abandoned farms. Memories of appetite laid out in lines. We could count the empty spaces of those hungers like rings in a tree trunk.

While we walked we broke open milkweed pods and scattered the seeds to watch them float in the air.