I promised I’d start doing these again, so you get a field report.

I took the dogs into the preserve. It’s late spring, which means that everything has leafed out for the summer season, some things are in bloom, and a few are even in fruit, such as the lone mulberry at the trailhead that’s already dropping berries into the wheel ruts. The unmowed grass was at chest high.

I could hear mainly goldfinches and the whirr and clank of the redwinged blackbirds in the bushes. On wing were barn swallows. (Last weekend while we were sitting outside, one of my nephews asked me what a swallow sounds like. I paused silently for a moment, motioned upwards with my eyes, and said, “That.”) Butterflies? There was a dusky orange skipper of some sort everywhere at foot level. Higher above the nascent seedheads of the grass were a lot of cabbage whites and even a few early monarchs. Further off I saw a swallowtail flash some yellow but I wasn’t close enough to identify it.

A couple dragonflies whirred past at an even higher plane. Despite my promise last summer I’ve only cracked the dragonfly and damselfly field guide a few times so far. And incidentally, I’m not pulling out field guides for any of this post: no effort to guarantee species or indigeneity. This just what I call them.

The cabbage whites along with multiples of bees were focused on some thistle blossoms which had reached the height of the unmowed grass. I risked untold handfuls I’m sure of ticks to wade out for a closer look. Myself, the smell of the honeysuckle would have been my biggest attractor if I had to name one.

For the dogs, though, it was the dead rodents in the newly-mown path.

The most emphatic visual punctuation were the profusions of raspberry blossoms from point to point along the path, and then the vibrant purple of the phlox that spouted up in the sunnier spots. 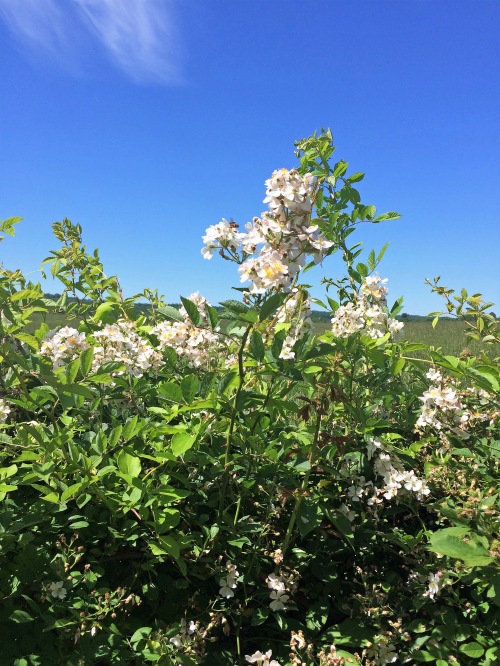 We were headed, or at least I was with companions in tow, to the creek, and tangled in the raspberry now are wild grape vines with the stems for fruit all set out. Making our way through that, I found the water clear and relatively still in the deeper areas where I scouted out a few locations to come back later with my microfishing gear to snag a few minnows to look at. Not today, though, not with the dogs in the water with me. There were a couple schools of minnows in the sunnier pools, and a scattered few low down in the shadier sides. I didn’t bother to stoop and look for the two-lined salamanders, though I’m sure they were there with me, along with everything else that I didn’t see or have seen so often that it doesn’t register as significant.

On the way back a medium-sized bird with a distinctive white rump leaped up from the path and flew off cackling into the trees. A flicker, I guess?